Portland’s Bureau of Transportation asked me to collaborate on a simple experiment: in 15 minutes at rush hour, how many people do cars vs buses vs bikes move down a certain street? It was part of an effort to convince City Council to invest in “rose lanes,” special bus-only lanes to pull transit out of congestion and make it more attractive to riders. More people on the bus, fewer people in cars, less congestion, less frustration, less climate-change-accelerating pollution. 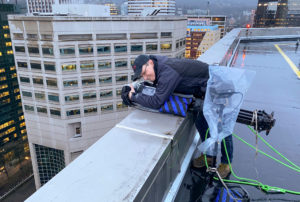 So I scouted good vantage points nearby and we settled on the top of a 20-story building overlooking Main street. When dawn broke on our shoot day, we set up the shot and rigged everything for safety (and rain-proofing), the rainy city laid out below us in soft blue light.

Back in the edit bay, I cut together this 60-second spot. Using the data provided by a team down on the street – where they actually counted not just cars, but the number of people in them (bikes, too; TriMet provided bus rider data) – I created a visual encapsulation of those 15 minutes tallied by streamlined (and custom) counters.

The difference – and its impact on congestion and pollution – is obvious and compelling. City Council passed the measure unanimously.

Film and video design and production, from script to post, from director, cinematographer and editor Matt Giraud.